Uncertain, Costly Power Supply: How to Mitigate Your Risk 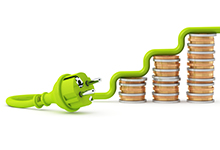 “The more that energy costs, the less economic activity there can be” (Robert Zubrin)

It has been 13 long years since we first experienced load shedding in 2007. Since then, businesses have lost thousands of hours of productivity and significant amounts of money to these “rolling blackouts”.

The situation is not going to improve – more load shedding is predicted, by Eskom itself, for the next five years together with even higher electricity tariffs. Given the impact of load shedding and the high cost of electricity, business owners are well-advised to understand and assess the risks faced in terms of electricity supply and to implement strategies to mitigate this risk.

In addition to its devastating impact on the economic environment in which companies operate, all businesses that use electricity for machinery, technology and light, experience a loss of production during power outages – even those with backup batteries or generators.

Smaller and medium sized businesses that cannot afford alternative energy solutions are disproportionately disadvantaged. Unable to provide any service, they lose customers too.

Companies also suffer physical damages from load shedding, for example, to computers and other electronic equipment, perishables damaged in refrigerators and raw materials wasted as production cycles are interrupted, and the inability to deliver to clients as load shedding affects traffic flow.

During load shedding, companies are also exposed to a greater security risk, as well as a theft and burglary risk, as security systems and processes are compromised, which, in addition, could affect their insurance cover.

A Basic Guide to PAYE and Four Common Mistakes

“The point to remember is that what the government gives it must first take away” John S. Coleman

If it weren’t for the PAYE system, which forces employees to pay taxes as they earn their money, each of us would be liable for a lump sum payment of between 18% and 45% of our total monthly earnings at the end of each tax year. Pay As You Earn (PAYE) requires that employers deduct money from their employees’ earnings as they earn it, and pay this money over to SARS on the employees’ behalf.

To calculate PAYE an employer should multiply an employee’s taxable earnings (which include any fringe benefits such as Disability Benefit Contributions etc.) by 52 weeks, 26 weeks or 12 months (depending on how often they get paid) to get an annual amount. This annual sum is then cross-referenced against the SARS tax tables to calculate annual tax. This is then divided again by the same work period to get the monthly PAYE tax which is then withheld, displayed on your IRP5 and paid over to SARS.

In cases where an employer pays certain things like medical aid, pension fund, income protection and/or retirement annuity fund contributions on an employee’s behalf, the employer must deduct these costs from the employee’s earnings and take these deductions/credits into account when calculating PAYE and making payment to SARS.  This is where problems begin to creep into the system.

Speak to your accountant for detailed advice.

POPIA and Your Business: A Practical 5-Step Action Plan to Implement Now 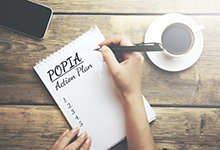 “By failing to prepare you are preparing to fail” (Benjamin Franklin)

The media is awash with warnings about the dangers of not complying with POPIA (the Protection of Personal Information Act) by 1 July 2021, and indeed the risks of non-compliance are substantial.

The clock is ticking …. if anyone in your business needs to be motivated to take this seriously, refer them to the Countdown Clock on the Information Regulator’s website.

Although you still have until the end of June 2021 to become fully compliant, there are major benefits to understanding POPIA and starting the compliance process now – before it becomes compulsory. The penalties for getting it wrong are sizeable, “preparation makes perfect”, you are giving yourself time to get it right, and for many businesses there is also good marketing potential in being able to tell your customers and clients that you are already addressing the situation.

Five practical steps to start with…

Before we start on your action plan, get to grips with the fact that you will almost certainly have to comply fully with POPIA. As soon as you in any way “process” (collect, use, manage, store, share, destroy and the like) any personal information relating to a “data subject” (customers, members, employees and so on), you are a “responsible party”. Very few businesses will fall outside that net. Equally you are unlikely to fall under exemptions like that applying to information processed “in the course of a purely personal or household activity”. Get going with these steps –

This is a complex topic and there is no substitute for tailored professional advice. What is set out above is of necessity no more than a simplified summary of a few practical highlights.

Where does Fairness Belong in Your Business and Why Should You Care? 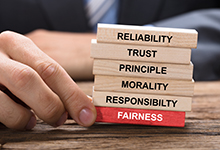 Many decisions are made on the basis of careful research and considerations about a variety of issues. Not all these deliberations will necessarily turn out to be correct. That in itself does not place question marks over the leadership’s execution of its responsibilities in terms of the Companies Act to act with due care, skill and diligence or the King IV Report Principle 1 that they should lead ethically and effectively.

An entity, which has been run and managed in such a way as to build a reputation for ethics, integrity and reliability, will likely have a growing group of loyal customers and other stakeholders, based on trust.

The size of the entity concerned has no bearing on whether or not it is trusted. That is based entirely on the entity’s consistent, trust-centred behaviour towards all its stakeholders.

What if things go wrong?

There will be times when a decision turns out to be wrong resulting in a service or product not being delivered on time or otherwise being deficient. The reasons may be beyond the control of management. However, such an event may have the potential to negatively impact stakeholders’ trust.

The cause may be the result of a strategic decision by management to change the nature or make-up of a service or product. For example, by reducing the size or contents of a product without any communication to consumers so as to increase profit margins or to avoid a price increase. This, of course, is a completely different proposition as it is inherently dishonest and lacking in transparency and integrity, questioning the moral mindset of management. Another example would be price-fixing and collusion. Some years ago this was evident in the construction and food processing industries.

A third example could be a deliberate decision to undertake activities without recognising the potential of damage to the environment; getting environmentalists, conservationists (some of whom may be customers) up in arms, and let’s not forget the reach and impact of social media.

What are the consequences?

In all examples there is a real likelihood of a loss of trust resulting in customers abandoning the entity. In the second set of examples, where there is real or perceived dishonest behaviour on the part of management there are likely to be fines/penalties (which there were in the cases of the construction and food processing industries). However, the real damage may well be the loss of trust – which for a smaller business could be fatal.

In the former case where the problem arose through a situation that was either not anticipated or due to a change of circumstances, the loss of trust is still possible but appropriate remedial action may avoid the destruction of trust.

Finally, in the last example, how the entity responds to the situation will determine the long-term consequences.

Can fairness make a difference?

Having said that, where an entity responds by treating customers fairly, putting right the problem as a matter of moral rectitude, trust is likely to be retained and may even be enhanced. This, of course, requires swift and transparent communication so that stakeholders are aware of the circumstances of both the issue and the entity’s response to it.

Consider the Autumn 1982 response of Johnson & Johnson to the deaths of seven people in Chicago who had taken its market leading, over-the-counter painkiller, Tylenol.

Throughout the crisis thousands of stories ran in U.S. newspapers together with hundreds of hours of national and local television coverage. A major potential trust breakdown for Johnson & Johnson, bearing in mind that Tylenol was the market leading paracetamol in the US and a substantial contributor to J&J’s revenue and profits. After the crisis, J&J said that over 90 percent of the American population had heard the story within the first week of the crisis.

J&J, however, did not have a crisis management plan, unthinkable today, or is it? Do you have anything like it?

So the company’s Chairman, James Burke, went back to the company’s founding credo. This saw the business as having a moral responsibility to society beyond sales and profit. He formed a seven-member strategy team with two tasks: how do we protect people and how do we save this product and our reputation?

First of all they alerted consumers via all available channels of communication not to consume any type of Tylenol product. They halted production and advertising and ordered a nationwide withdrawal of the product. This cost the company millions of dollars, however, it received credit for putting public safety above profit.

The cornerstone of J&J’s recovery, in priority order, was: People, Environment, Property and only then Finance. They restored trust by behaving fairly to the most important people, their stakeholders. J&J’s Tylenol, accordingly, ultimately re-gained its market share.

This is an example where fairness retained trust. There is even the possibility, as occurred in this case, of the enhancement of trust when, after the event, it is seen that the promise of fairness has been honoured in full.

So, all in all, treating all stakeholders fairly is a moral approach to business which enhances relationships. Even in personal relationships, responding with fairness when trust is at risk, can save the relationship.

An investment in fairness as a matter of corporate value is as essential and generates as good returns as fundamental trustworthy behaviour.

“In conclusion, it is clear to me that Trust and fairness in the workplace are connected as they are in all of life. Trust defines how we as humans relate to one to another, while fairness is a practical mechanism for maximising the benefits of trust. The two work together, and we need them both to operate consistently at the heart of workplace activity. In other words, ‘Trustworthy Fairness’ provides a foundation for building meaningful and productive workplace life” (Jonathan Rens).

Your Tax Deadlines for May 2021 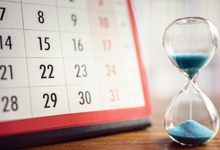